Varies from extremely pale, to varying shades of tawny and golden, to a variety of pale grays.

Varies from pale, to varying shades of tawny and golden, and sickly gray.

Varies from pale, to varying shades of light amber or golden, to a deep golden color.

The Fool, also known as Beloved and by various other aliases, is a White who believes himself the White Prophet of his age and that Fitz is his Catalyst.

The Fool's physical appearance changes throughout the series. He regularly suffers from a flu-like illness which leaves him bedridden for several days, after which his skin sloughs off to reveal darker skin underneath.

The Fool is introduced in the Farseer Trilogy as a the odd-looking jester of King Shrewd's court. He is pale to the point of being nearly albino, with thin white hair and colorless eyes that many people find hard to meet. As the jester, he dresses in blue-and-red motley, or a black-and-white motley for winter. By the end of the trilogy, Fitz notes that the Fool has begun to undergo a change, and that his skin and eyes have become ever so slightly golden. In Assassin's Quest, the Fool receives traces of Skill on some of the fingers of his left hand.

The Fool appears in the Liveship Traders Trilogy masquerading as the female bead-maker Amber in Bingtown. Amber is described as tawny in both her skin and long hair, and her eyes are golden as well. She wears several pieces of jewelry; many are wooden and of her own make, the exception being a silver and sapphire slave earring.

The Fool returns to Buckkeep in the Tawny Man Trilogy in the guise of Lord Golden, a Jamaillian noble. Lord Golden has long, curly golden hair and wears extremely flamboyant and fashionable clothes. He participates in the latest beauty trends, decorating his face with markings that resemble those of Elderlings. In Golden Fool, the Fool reveals that he has an intricate back tattoo which depicts several colorful dragons. This tattoo is flayed from his back along with his skin in Fool's Fate.

In the Fitz and the Fool Trilogy, extensive torture renders the Fool unrecognizable to Fitz. He is short-haired and paler than he has been in years, appearing almost a corpse-like gray; he is blind, his hands are deformed, and he is covered in scars and abscesses. The dragon's blood he drinks in an attempt to restore his health begins to alter his appearance in ways similar to those that dragons effect in Elderlings. When he is somewhat healed and visits Kelsingra, he returns to the guise of Amber.

The questions of the Fool's gender are raised several times throughout the series and never definitively answered. Fitz believes the Fool is male. In Assassin's Quest, Starling Birdsong becomes convinced the Fool is female. When masquerading as Amber, the Fool is exclusively perceived as female. Likewise, Lord Golden is believed male, except by Jek, who sees Amber in disguise. The Fool was presented to the Pale Woman as a young child, and she both called the Fool by name (“Beloved“) and referred to the Fool as a male when they first met again many years later.

When directly questioned on the matter, the Fool has said that their gender is no one's business but their own.

In the final series Fitz and the Fool, the Fool is asked about their child, where he has not given birth to one but one exists. They almost confirm to Fitz his gender is male.

The Fool alters his actions and mannerisms to maintain the façade of the characters he plays. As King Shrewd's jester, he is acrobatic, sing-song, and fond of publicly embarrassing most who speak to him. Lord Golden delights in finery and frippery and flirting. Some of these traits appear to be part of his intrinsic personality. Even in private he is frequently sarcastic and takes great pleasure in teasing his friends. He comments on his delight in dressing himself and Fitz in fancier clothing, and also appears to enjoy making himself up as Amber. However, he is also prone to graveness or even despair when reflecting on his role in the world and the tasks he feels he must accomplish.

Little is known of the Fool's early life. According to him, he was born in a small village to a mother and two fathers, which was customary in his land. His mother had black hair and green eyes, his fathers were brothers, and he had a sister with golden hair. He was recognized as special by the people of his village and eventually taken to Clerres. This last gives him sympathy towards Girl-on-a-Dragon, and he strives to awaken her and set her free.

The Fool predicts the future and uses Fitz to change it to his vision, which is not always easy on the Catalyst. The Fool tells FitzChivalry that they are to save the world by saving the Six Duchies. If you save part of the world, you save all of it, as that is the only way it can be done, or so he says.

It is said that the Fool knows everything before it happens and that he knows if anyone, anywhere speaks of him. Others say it is just his great love of saying 'I warned you so!' and that he takes his most obscure sayings and twists them into prophecies. Perhaps sometimes this has been so, but in many a well-witnessed cases, he has predicted, however obscurely, events that later came to pass. The Fool came to Buckkeep in the seventeenth year of King Shrewd's reign, but from where has always been a common question amongst the citizens of the keep. Many stories have arisen, one being that he was captive of the Red Ship raiders and Bingtown traders seized him from them. Another is that the Fool was found as a baby upon a small boat shielded from the sun by a parasol of sharkskin and cushioned on a bed of heather and lavender.

The Fool is the young court jester in King Shrewd's court. He is sharp of mind and tongue, and oddly pale. He stands out from the other children, and appears to be about the same age as Fitz when he arrives at the court. He is often dressed gayly, and carries around a scepter with a carved rat into the top of it, which he names Ratsy. The Fool is an odd character, and he makes most people in Buckkeep uneasy, as they are very superstitiious about anyone with "odd" appearances. In the Fool's case, it is because he is completely white, from his skin to his hair to his eyes. He meets Fitz, giving him a riddle, and they eventually become friends. The Fool and Fitz stand by each other through all of the trials and tribulations that they face. The Fool tells Fitz that he is a white prophet and that Fitz is his catalyst.

During the events of the Tawny Man Trilogy, he is confronted by Fitz, who is disturbed by rumours that he and the Fool's love for each other go farther than friendship. The Fool admits to him that his love for Fitz has no bounds, and distances himself away from Fitz when he tells that he would never want to bed him. Soon after, Fitz confronts the Fool again. This time he is worried about the Narcheska's tattoos, and the Fool reluctantly shows Fitz his own tattoos. The Fool says that he was given them by the same people that cherished him, on The Pale Woman's bidding. the Fool after accomplishing his mission, is tortured to the death by the Pale Woman, who is the false White Prophet, by being beaten, and having a large part of the skin of his back, containing the Pale Woman's dragon tattoo, removed. Fitz searches the Pale Woman's stronghold to find the Fool's body and takes him to relative safety via a Skill-pillar. On the other side, in the Stone Garden, he resurrects the Fool by using the Wit to draw the Fool's spirit away from the rooster crown, where it fled to, and re-construct the Fool's body. Fitz then brings the Fool to Prilkop (the Black Man) on Aslevjal, one of the Fool's kind, whose skin is completely black, as one day the Fool's skin will become. Prilkop was the White Prophet of an earlier Age, that ended with the cataclysm in which the Elderlings and Dragons were destroyed. He had waited on Aslevjal for the next White Prophet, that having been his last vision of the future. The Fool and Prilkop decide to return to their homeland to share all they had learned as Prophets. It is implied that at some point in the future, Fitz and the Fool will again be reunited.

Fitz and the Fool

The Fool has send Fitz a few messages over the years, but only one, maybe two, have ever arrived at his doorstep. The message is cryptic, and tells Fitz that he needs to search for the Fool's "unexpected son". They are reunited, after Fitz nearly stabs the Fool to death believing that he is trying to kidnap and harm his daughter, Bee. Fitz then realizes his mistake and skill-heals the Fool enough that they will not immediately perish. The Fool tells Fitz, while he is healing at Buckkeep castle, that he was violently tortured and violated by "the servants". The Fool is badly injured, bilnded, and gnarled with all of the traumas that he has endured. 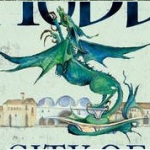